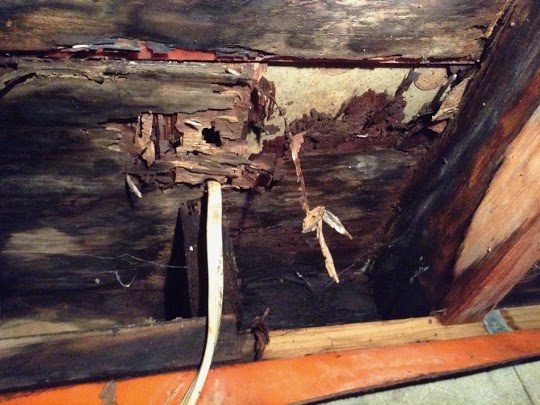 This example of poor & unprofessional service is not uncommon in the Brisbane residential scene and for such a substantial investment of over $1.5m it is very worrying. The homeowner was alerted to this when the shower floor started to give way.

The first thing my team did was crawl under the house and this photo shows the substantial damage that had occurred & had been happening for some time. There was no easy solution so the shower area had to be demolished and rebuilt. The cause of the problem involved more incompetence where a full height window formed one of the shower walls which is generally not done and on top of this it was installed upside down which meant water seeped in through the seals and then exited into the frame and floor below causing all of the damage. Further compounding the issue was the waterproofing was not completed properly.

All of the above created a perfect storm that could have been avoided to some degree if the 5 professionals involved would have done their job!

Sorry, the comment form is closed at this time.